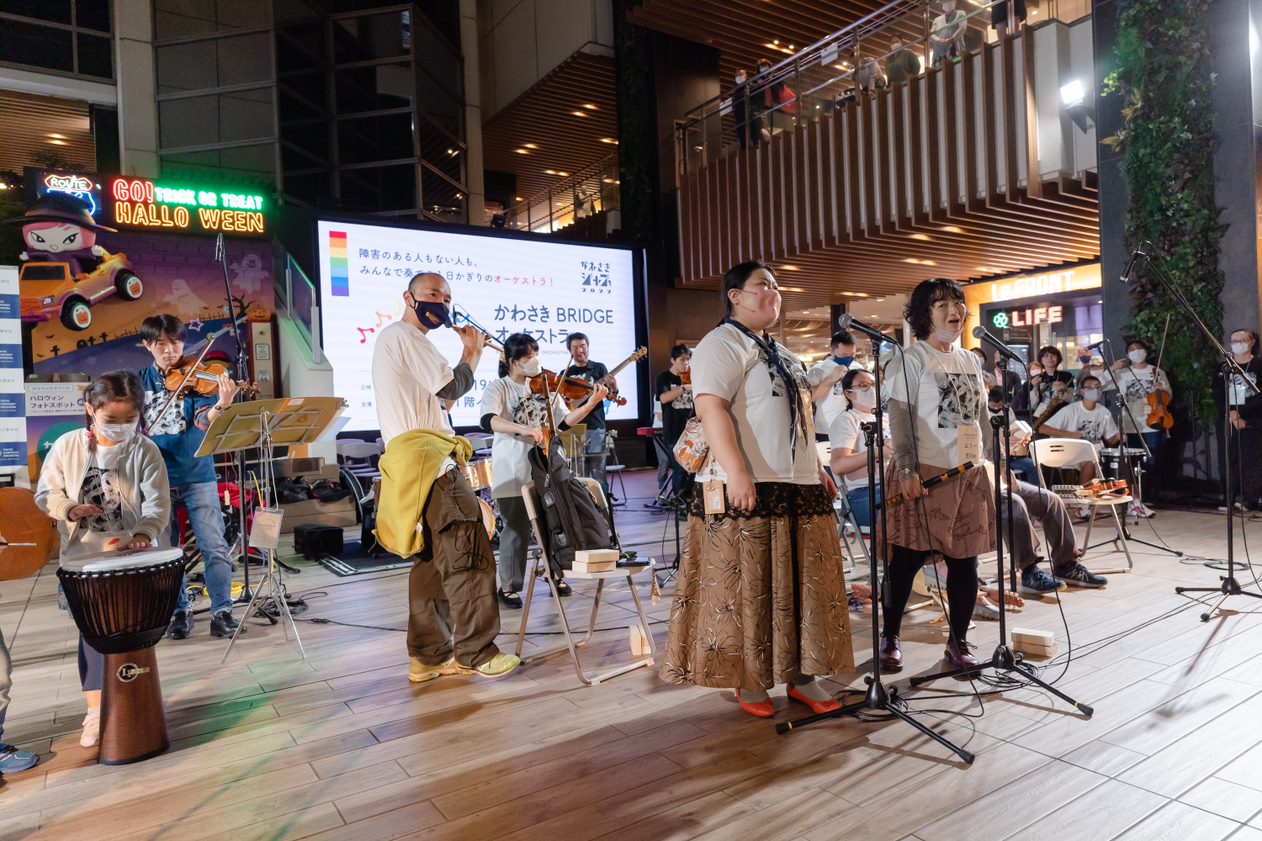 The Community Music Gods were smiling the day we were invited by the Tokyo Symphony Orchestra and British Council Japan to return to Kawasaki, a city just south of Tokyo and birthplace of last year’s Kawasaki Suite. The plan was to share the Drake Music approach with a team of six musicians, drawn equally from the Toyko Symphony Orchestra and Kawasaki Jazz. We would then work together to create an integrated ensemble made up of 30 Kawasaki citizens to connect, explore, rehearse and perform. 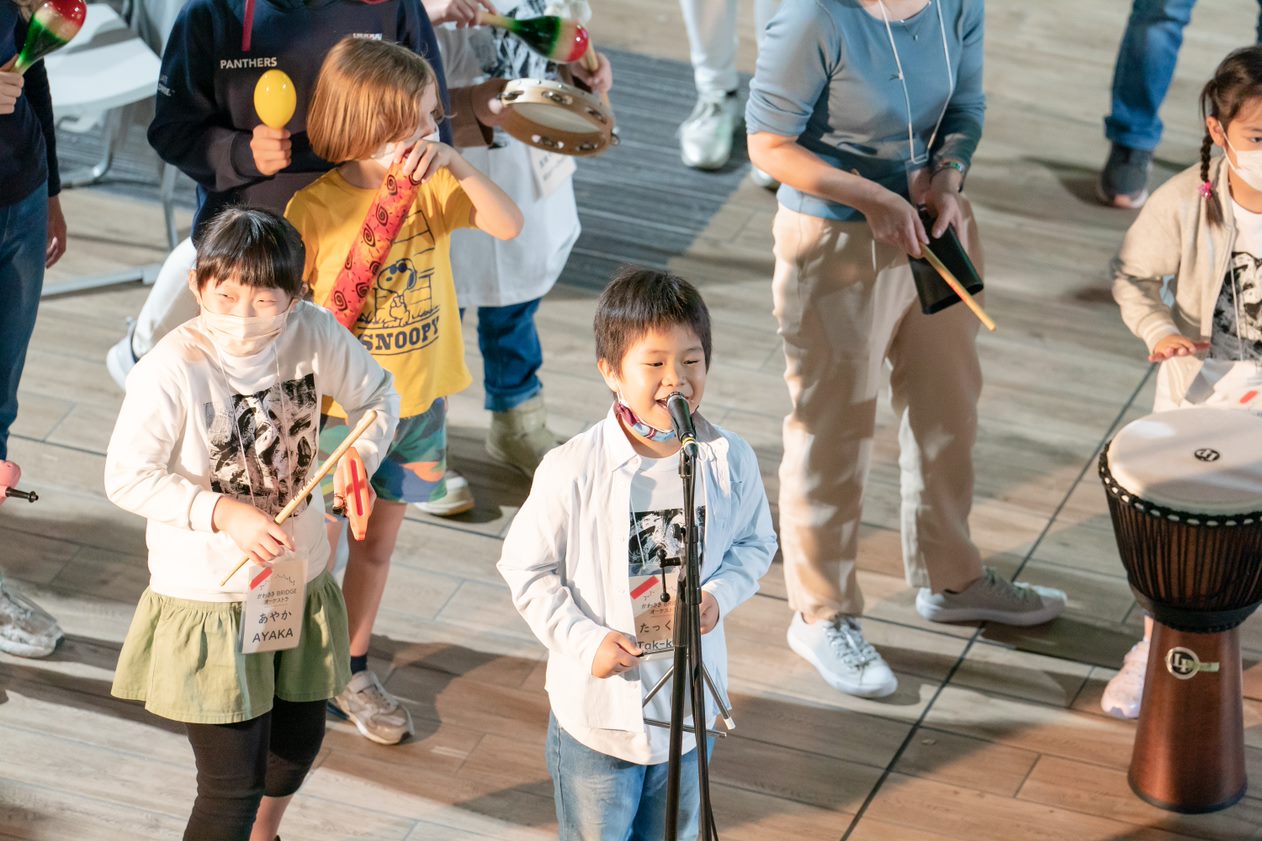 Working with the theme of ‘journey’, I chose three songs for us to work up: the upbeat Jazz standard ‘Take the ‘A’ Train’, an introspective Ali Farka Toure blues piece named ‘Ai Du’, and Tito Puente’s universally groovy ‘Oye Como Va’. I am all about the feels these days, and wanted to know how the musicians felt about the various skills they would need to support the community workshops.

The Kawasaki Jazz guys – drum kit, electric bass, piano, a sparkling and incredibly tight trio – felt very comfortable with the jazz repertoire elements of the piece, but were unsure about the facilitation element. In contrast, the TSO team – violin, viola and contrabass – had worked with us for three years, and their concern was less with the facilitation and more with how they would work within the compositions, and specifically the improvisation element. 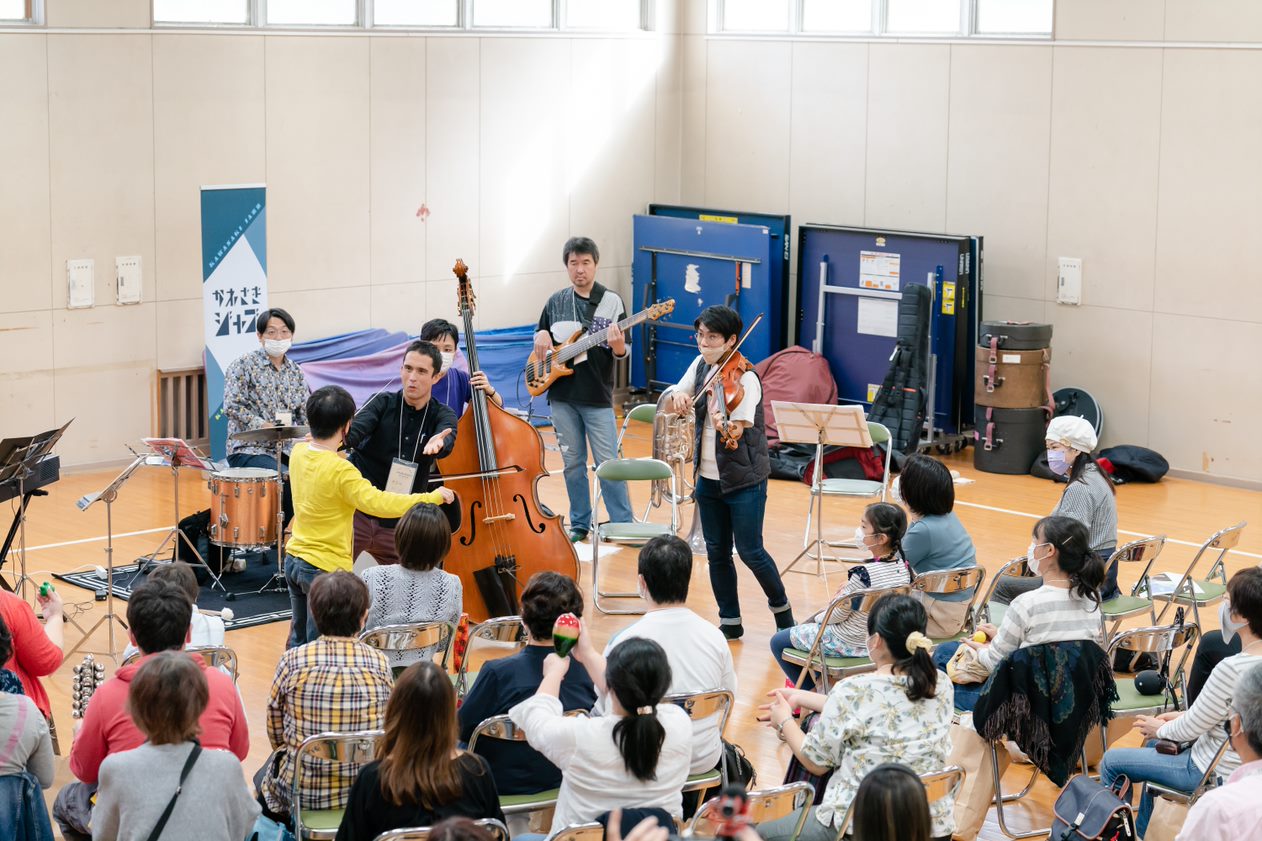 I have covered facilitation skills quite a lot on other blogs, so here I want to briefly share some methods that offer both classically trained musicians and community members ways into improvisation. To journey out of the head and into the music. To move and be moved. To get to the heart of things, regardless of ability or previous experience.

The TSO musicians were very used to being judged on their ability to play their principle instrument. We wanted to move away from judgement. To paraphrase Rumi: ‘beyond right and wrong… I’ll meet you there’. The solution? Get everyone on new instruments. iPads, tuned percussion, voice. Physically seperated from the instrument that was so connected to the ‘rules’ of music, the musicians were able to explore without fear of failure. I then explicitly asked them to make a note of this mindset, and transfer it back to their main instruments. 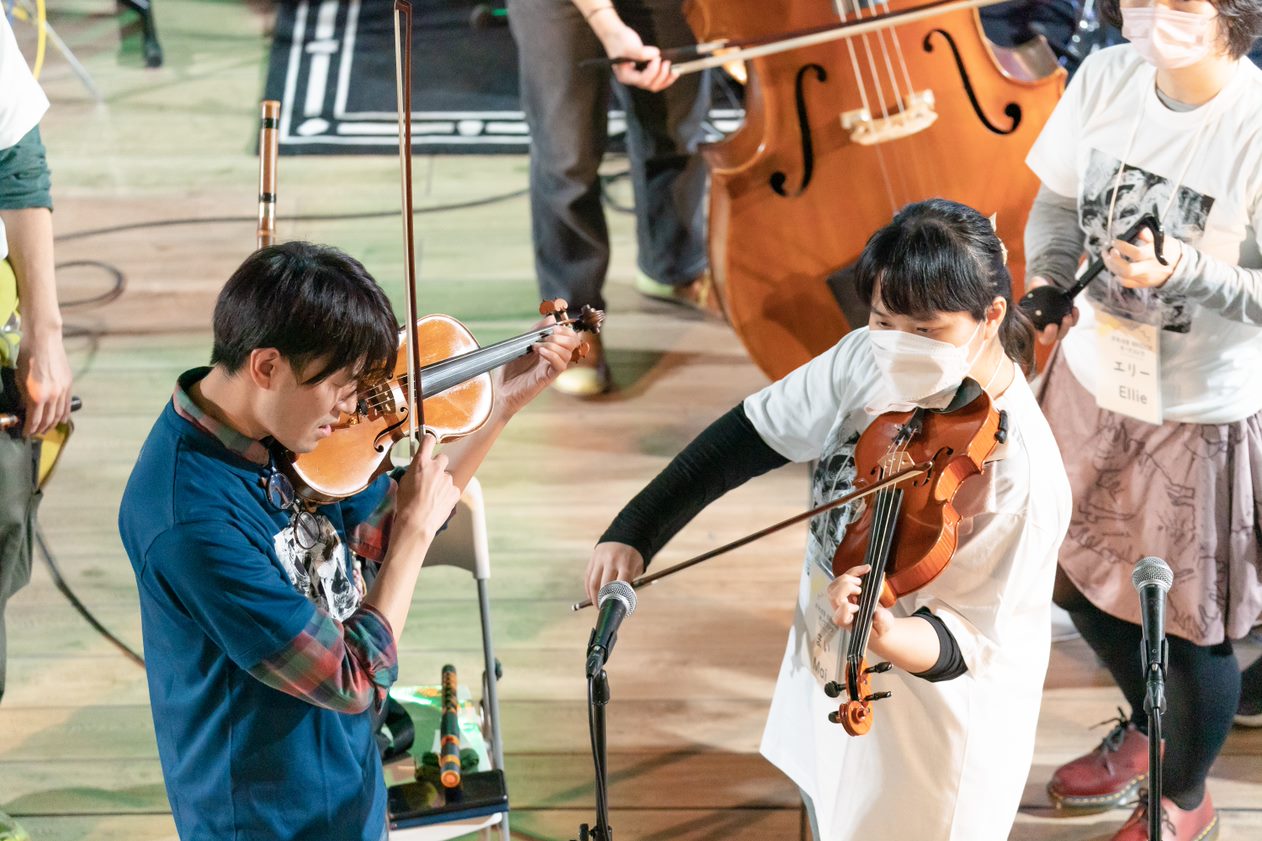 Maybe a slightly provocative title there, but I find that when people want to learn about improvisation they learn about about scales and chord tones, ‘blue notes’ and chord progressions. All of these relate to pitch, yet pitch is just one of the many elements of music we can improvise with. How about we think about contrasting dynamics as a form of improvisation, or how we articulate individual notes, or creating polyrhythms with other players or contrasting the quality of our tones (on my sax I can growl, add overtones, be more or less ‘breathy’). It can be much easier for pupils with less experience and/or cognition to experiment with some of these other elements of music, and leads to a equalising of ability and a renewed sense of what is possible (and what music can be) for the group as a whole. 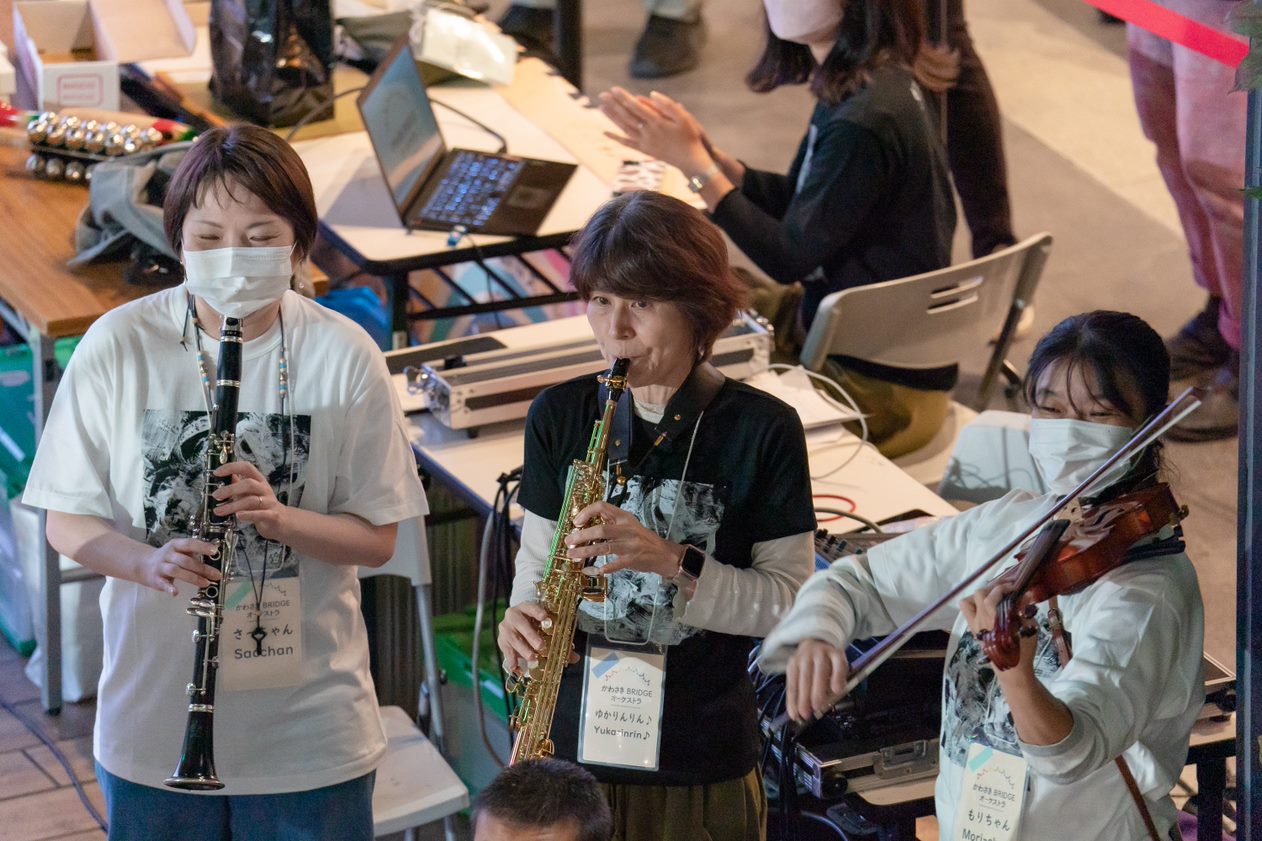 Play Santana’s version of ‘Oye Como Va‘ to 00:16 and you will hear one of those melodies that maximises the ‘simplicity to effectiveness’ scale – I can’t describe how this riff makes me feel, but if it was a food it would be chinese five spice and if it was a colour it would be dark mustard yellow. It is all in the key of A minor, and can be picked up fairly quickly by beginner instrumentalists. 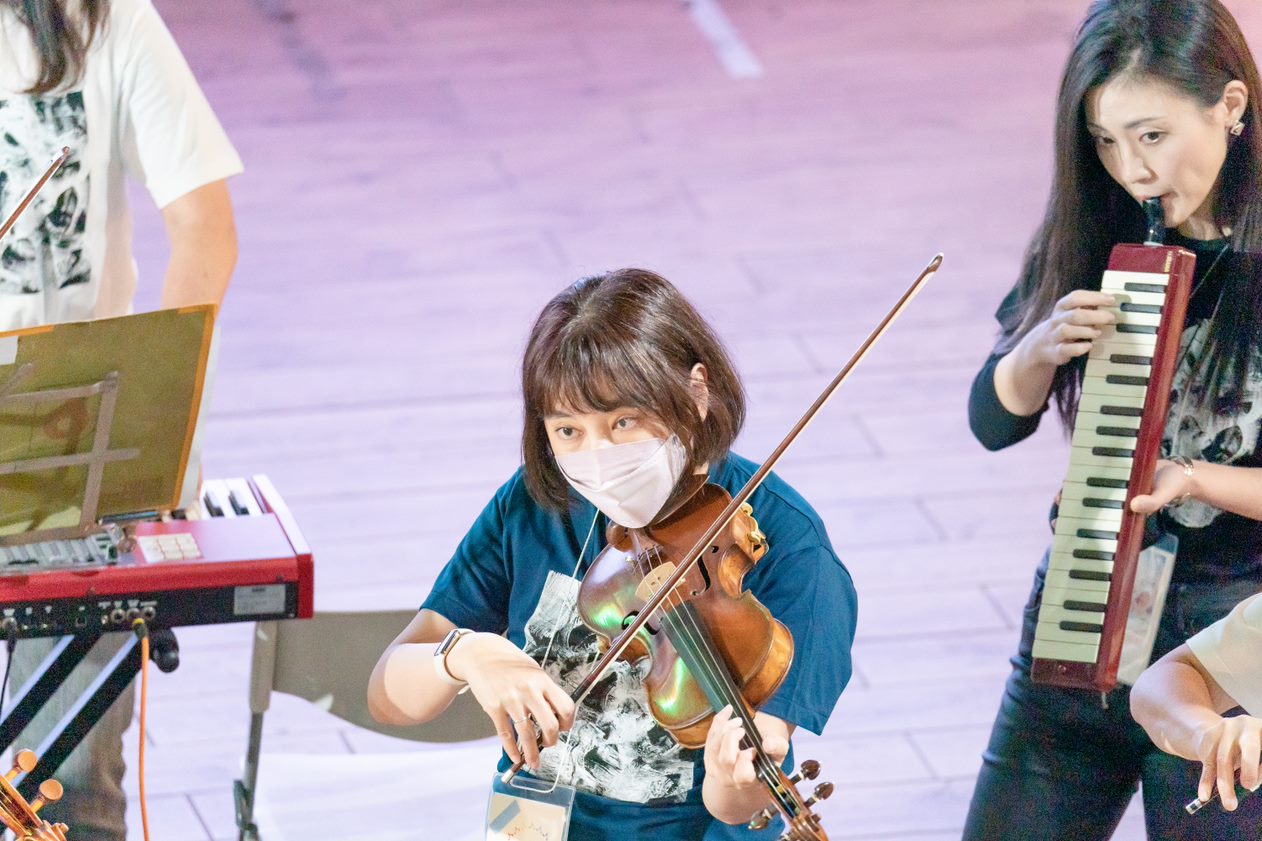 We can then use techniques that Jazzer will be familiar with – doubling the length, playing it upside down or back to front, skipping notes and/or ornamenting others. Adding an ‘answer’ phrase. The TSO musicians found this to be a good way in, I think because there were clear parameters and options that they could try out. It also creates solos that have lots of space and ‘make sense’ to the listener.

One of the most successful methods we tried involved one person, usually someone without lots of musical experience, using their arm to conduct an instrumentalist: conductor raises their arm, instrumentalists raising the pitch. This can develop into rather complex, but always intuitive, musical connections, where the conductor uses various movements to indicate articulation and dynamics. Sometimes it seemed more like dancing than conducting, but always led to fantastic focus and connection between participants, even those that tended to only be engaged for short periods.

5. Give the rhythm, improv the pitch Some of the participants were very much beginners on their instruments, and could play a just few notes comfortably. One thing that we tried that worked really well was for me to play a one or two bar rhythm on a single note on my clarinet (the tonic of whatever chord the group was playing), and then for them to repeat the rhythm but moving across two, three or four different pitches of their choice. During the rehearsals they built up a ‘bank’ of rhythms that they were then able to practice and string together into solos further down the line.

Most of these ideas require a simple chord progression – two or three chords – rather than a load of Jazz changes, but the songs we chose are just some of the many bangers that fall into this category. One of our tunes ‘Take the ‘A’ Train’ does have lots of chords, but the Michel Petrucciani version includes a one chord vamp that can be played either side of the head and soloed over.

All photos with thanks from ©Taku Watanabe 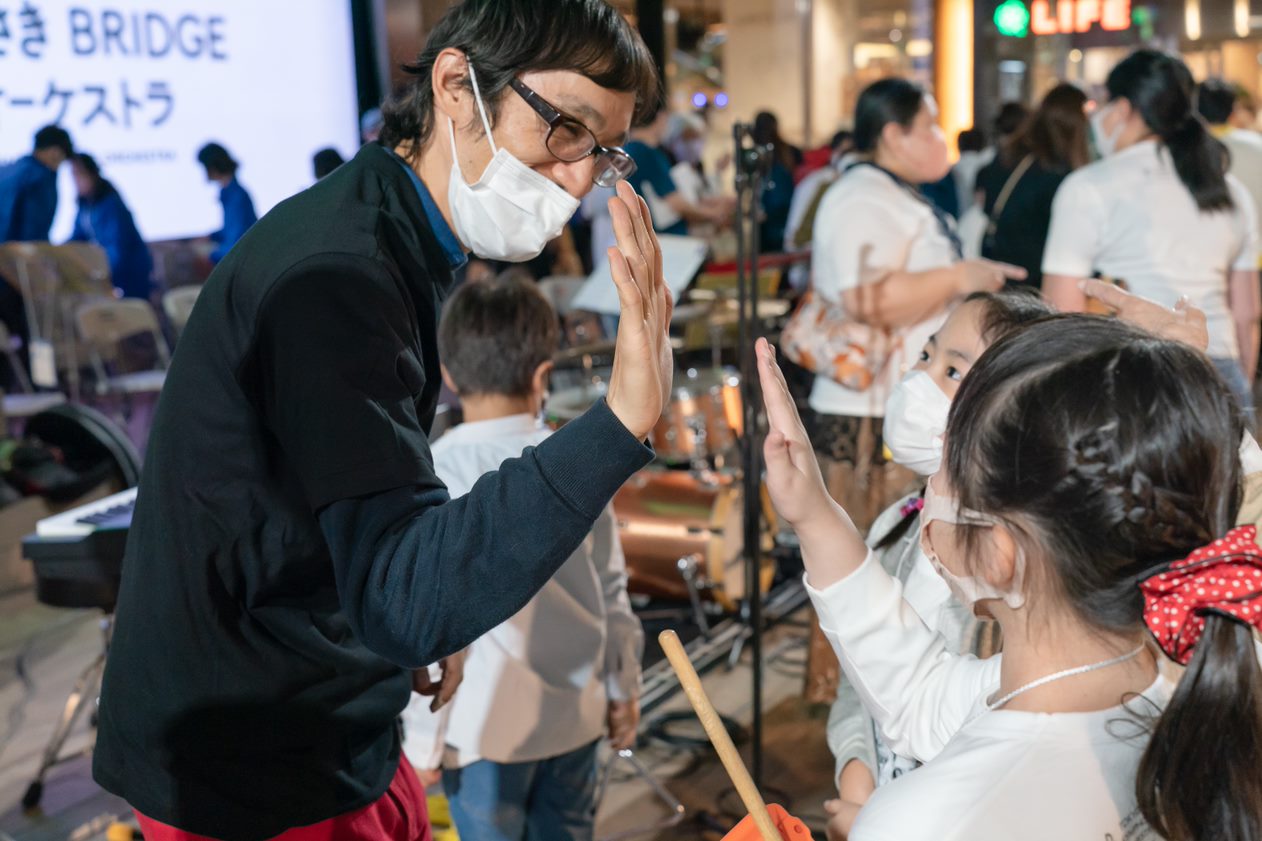 Showcase success for our Ascendant Artists »

Welcome to Our 2022 Emergent Artists »

A Huge Welcome to Our 2022 Artists In Residence »